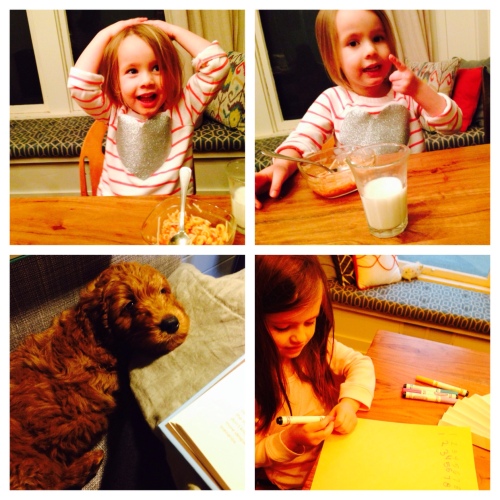 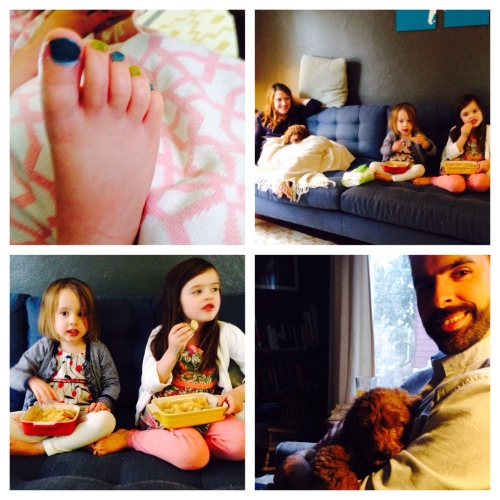 Six days in, February is already sweet. I tweaked my work schedule around a bit last week and something about it finally feels right. Little things can make such a difference. The girls are playing so well together. Almost every morning I wake up to sounds of sisters playing Frozen or playing camping or playing make-mom-breakfast in bed. I fake sip coffee and cereal and it is awesome. George is settling in, sleeping through the night, going to bathroom outside more than on my rugs inside. Have I mentioned he has developed a taste for chicken feces? Yes! But we are enjoying him so much. Cate is especially good with George. She is helpful and kind and packs him around. I love five-year-olds.

I used to watch a lot of football with Telfer when we were childless but now, with the girls and a job it’s not exactly high on my list. But I did sit down and watch the Super Bowl with Telfer. It was so fun! The girls lasted as long as their bowl of potato chips but then played together so we could sit and watch the game. The girls and I may have had a dance party during Bruno Mars. How could you not dance during that show? Telfer read Sam Sifton’s Super Bowl food article (we have a thing for Sam Sifton) and we made the nachos and the clam dip. Not sure what I think about clam dip in general but the nachos were amazing.

This weekend: I have about four hours left of my work week today and then tomorrow, Telfer and I are spending one night at the lake house by ourselves (thank you Maresa). Taylor Shellfish Farms is on the way out to the lake and we are stopping for some mussels. Already looking forward to mussels and bread and wine. And maybe some chocolate. I am reading about fourteen books right now so it will be nice to sit in front of a fire and finish one or two of them.

I realize this is the second David Brooks column that I have linked to lately, but this column last week is worth reading. One quote: “And yet there is a silent majority who experience a faith that is attractively marked by combinations of fervor and doubt, clarity and confusion, empathy and moral demand.” Yes. Telfer sent me the link to the column and I was so thankful so see my rattling, inarticulate, discouraged thoughts expressed so well. Lately, I see such a disconnect between a living faith and the Church (at least with my personal experience). Such a disconnect. Any thoughts?

5 thoughts on “An update and a question”