I set my alarm for 6:20 this morning with the plan of hitting the treadmill first thing. Except I set my alarm for 6:20 PM. So when my employee showed up early this afternoon, I walked around the lake listening to Patti Smith’s haunting and lovely M Train. It’s one of those books I wish would never end. It’s a chilly, raw day that almost feels like November instead of March. But then I look up and I see the faint hint of pink life in the trees and know we are on the cusp.

It’s now late on Wednesday afternoon and I am working away. Later tonight, Telfer and I are meeting Chris and Mendy for dinner.  This month I am hoping to launch both a shop email newsletter and a new commerce website. Customers will be able to buy (new) books on our site and have them sent to the shop (free shipping) or their homes. I will be able to talk about books here or on the shop website and the links will go to our site rather than out to Powell’s or the nefarious Amazon. I am hoping to modulate my tone on the Amazon subject but a year and a half in small business has been eye-opening to say the least. But I promise: I will keep my preaching to a minimum. 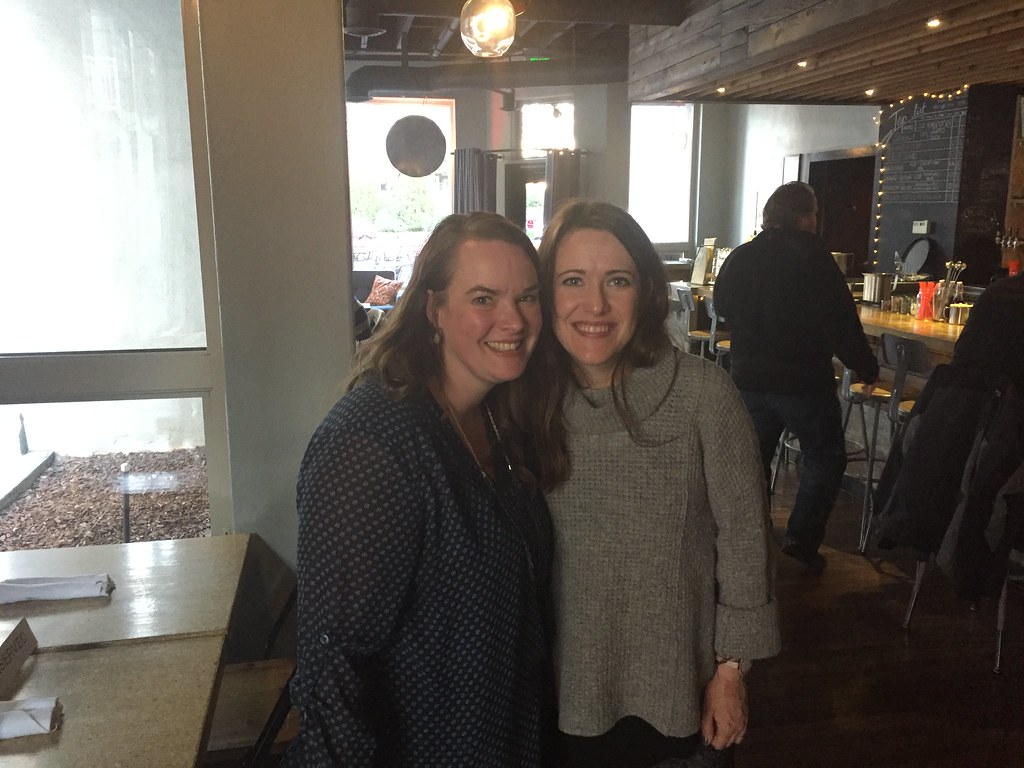 Remember how I chose the word “open” for 2016? When a professor at NNU asked me to serve on a new Women in Leadership Initiative I immediately dismissed the idea. I am not a leader. Yes, I own a small business and yes, I graduated from NNU and yes, I care about first generation female college students, but no thank you. Then I remembered my word and the fact that I responded in the exact way that prompts the need to even have a Women in Leadership Initiative in the first place. So I went to NNU last Thursday. It was a one-day trip and such a delight. The meeting itself was fascinating and I reconnected with one of my very favorite professors from fifteen years ago. It’s such a strange feeling to sit in a familiar place and talk to an admired professor but now you are both adults. It’s a lovely thing. My Anna picked me up after the meeting and we had a quick bite before she dropped me off at the airport. I was home by 8:00 PM and got to say good night to the girls before they fell asleep. Yes for staying open to new possibilities and adventures and experiences.

Telfer and I are watching the documentary series Making a Murderer on Netflix and I am completely, utterly gripped by the story and all of its themes – class and deep prejudice, small towns and the justice system. I am also committed to not googling the case until we finish watching the series so I really don’t know what happens in the end (although I have a good guess). The story in a nutshell: Steven Avery is convicted of rape, maintains his innocence, serves 18 years in prison and then is released after DNA evidences clears him. He gets out of prison and begins to piece together a life. And then Teresa Halbach, a young woman is murdered and all evidence points to Steven Avery as the murderer. The series covers the first crime and Avery’s trial for the murder of Halbach. All with a Wisconsin accent. Telfer and I can’t really binge watch anything because of Telfer’s meeting and call schedules but we are more than halfway through the ten episodes. I love television right now. 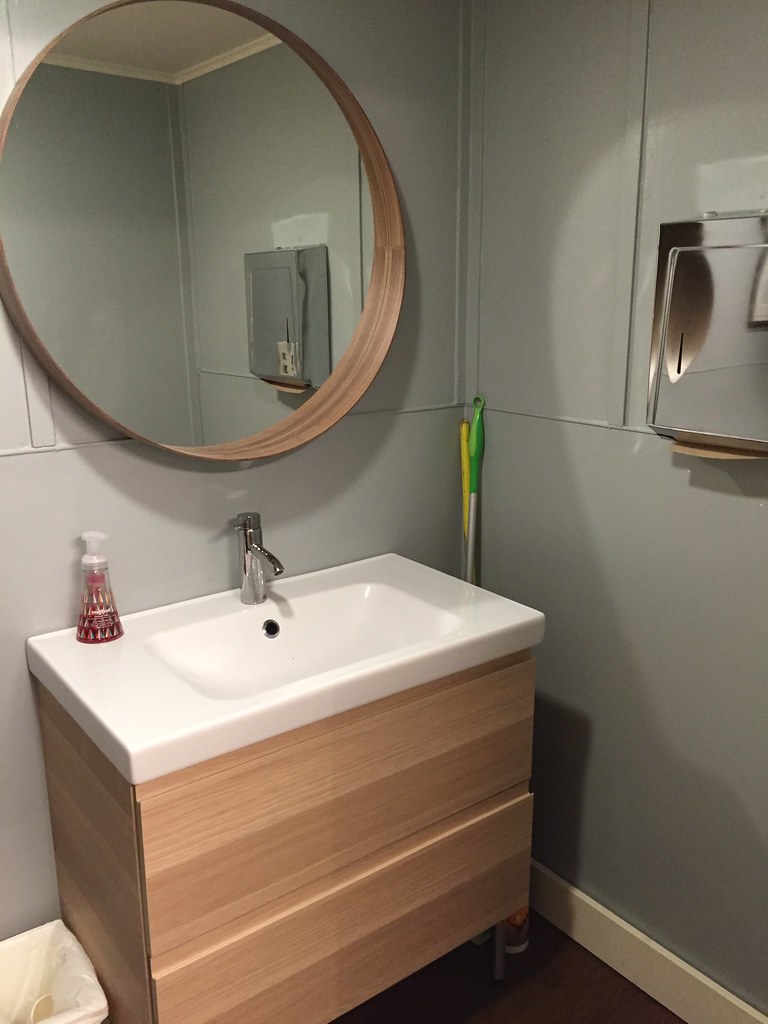 Reminder: this is what the shop bathroom looked like before. Telfer and our friend Tony remodeled the bathroom at the shop late one Friday night a few weeks ago. The transformation is astonishing. Jane has long been afraid of this bathroom – she locked herself in one morning at the shop and had subsequent nightmares of the toilet overflowing on her. It looks so much better. It’s amazing what a little work and a trip to Ikea can do. 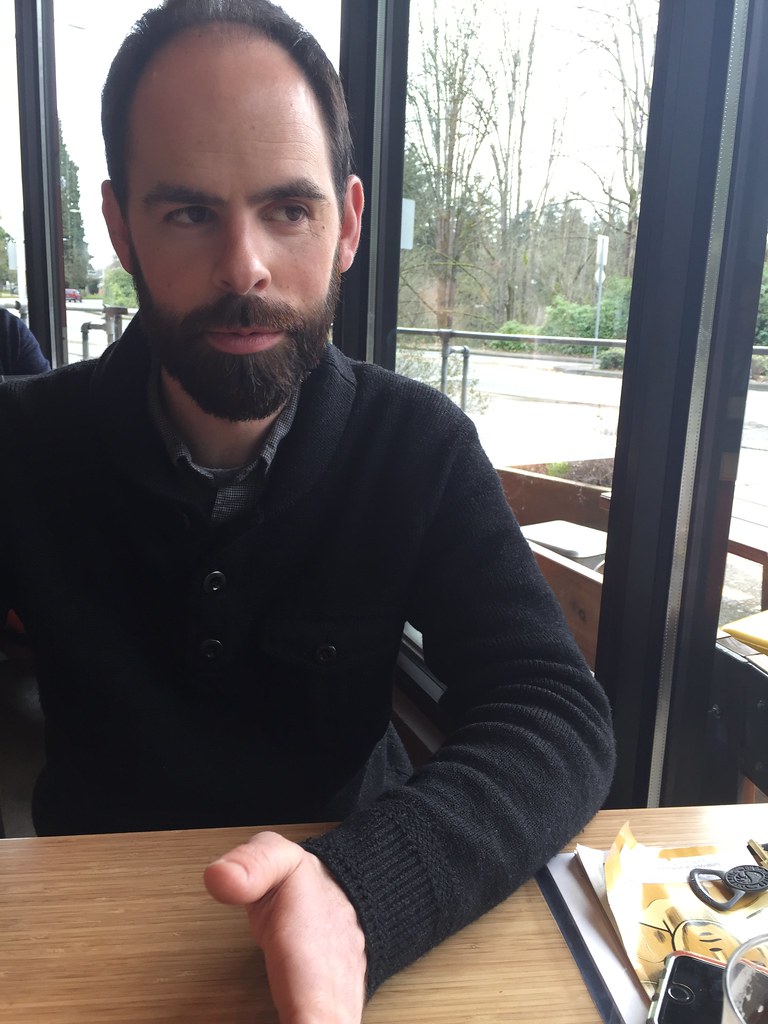 I took a series of photos of Telfer at Vic’s, a local pizza joint with lovely light earlier this week. He had been using a headshot on his work email and other places that I just thought made him look too old (and with a weird neck). He went with a different photo in the series but this is my clear favorite. He is probably telling me a three point plan to make something good even better. I love him. 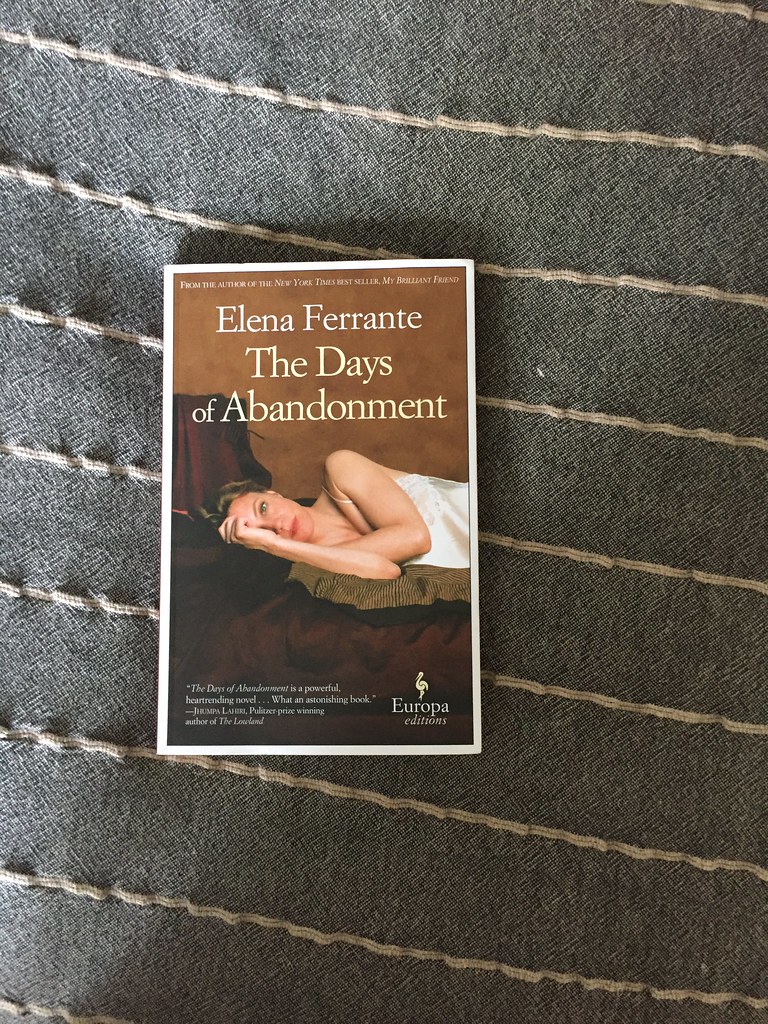 One of my customers and a colleague of Telfer’s told me NOT to read The Days of Abandonment by Elena Ferrante. But after reading (and adoring) The Neopolitan Novels, of course I didn’t listen. I can see though why she didn’t want me to read it – a woman about my age, nearing 40, is abandoned by her husband for a much younger woman, leaving her with two young children and few prospects. This is an intense novel, almost like reading a fever if that makes sense. But hopeful in the end and there were moments that I could sense the beginnings of Elena, the narrator of the Neapolitan novels. 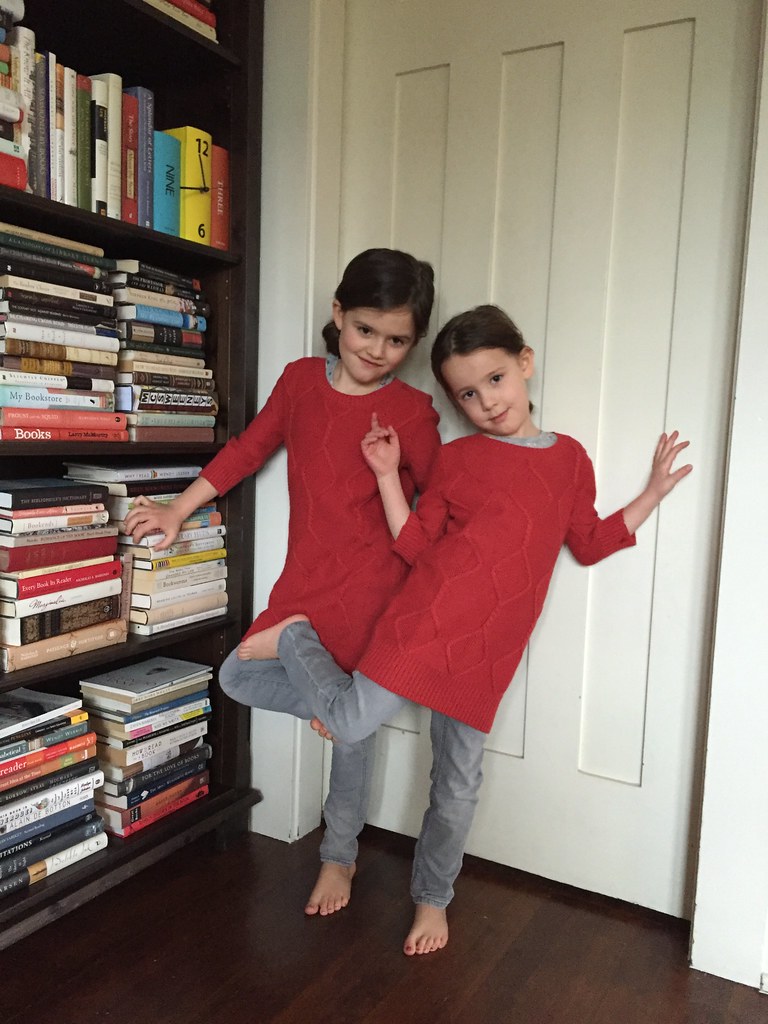 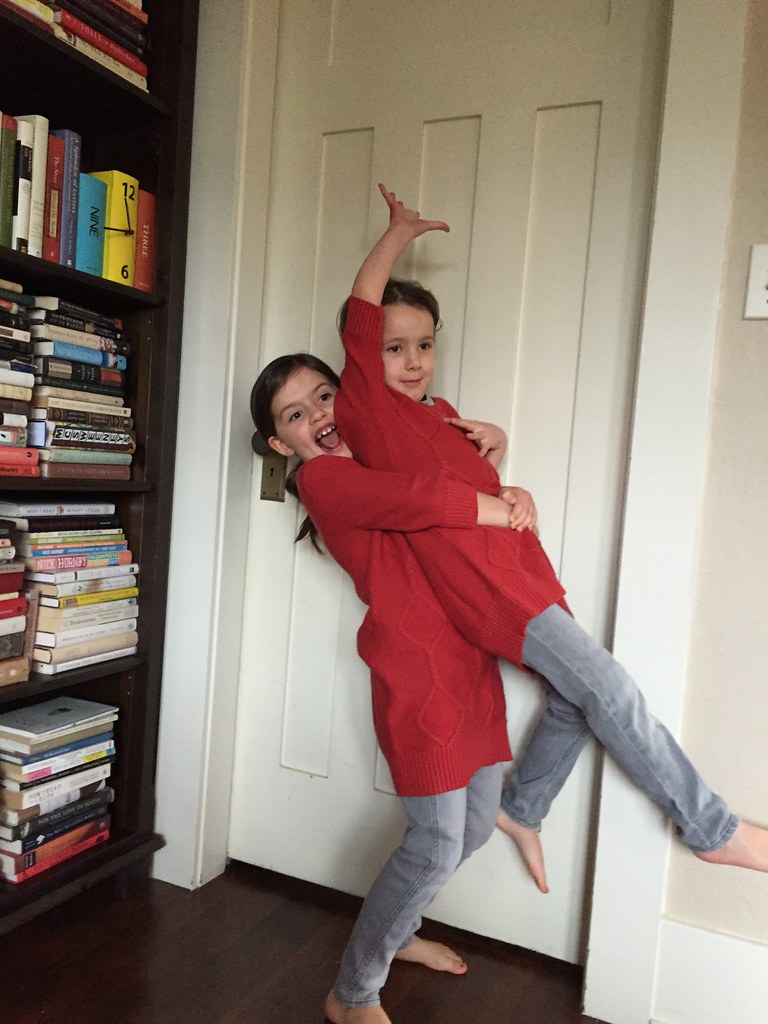 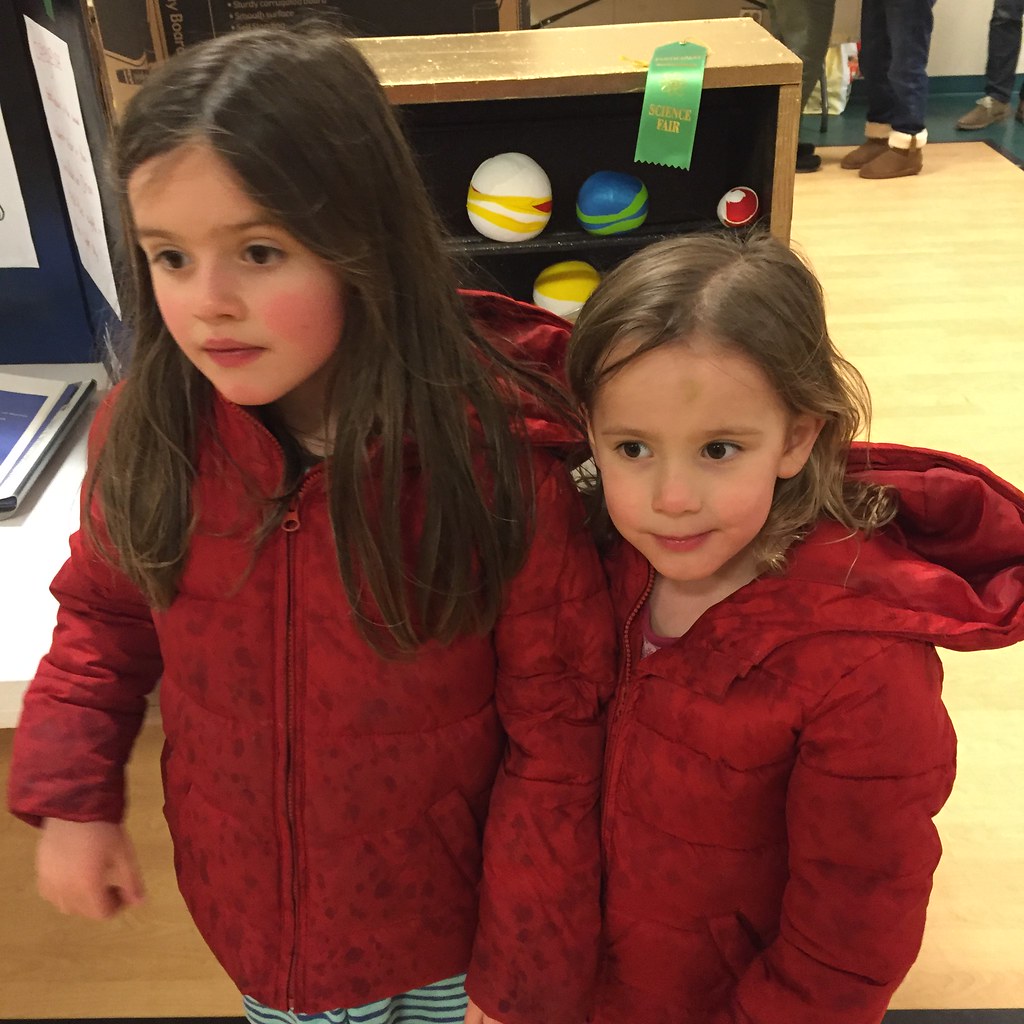 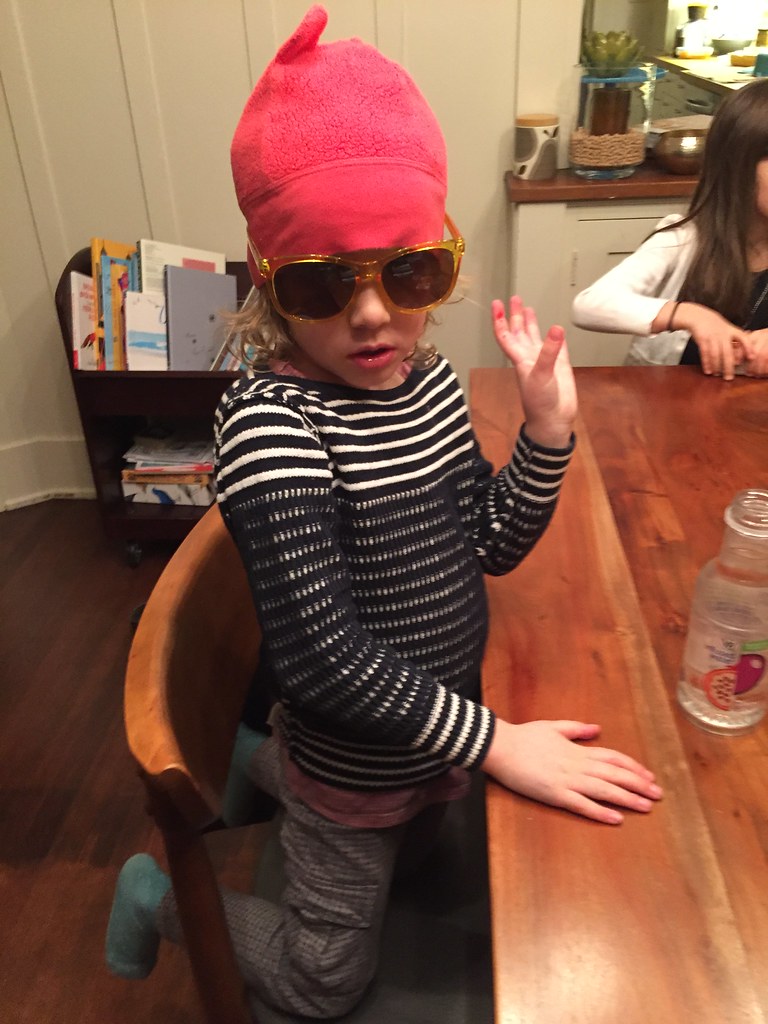 And finally, the girls. How can I not? My mom took the top two photos of Cate and Jane in the red dresses she bought them. Classic C& J moves. Cate participated in her first science fair last week – she and Daddy created a colorful solar system model that you can see in the background of the photo. And lastly, Jane being Jane. Love these two.

One thought on “Five Things on a Wednesday Afternoon”