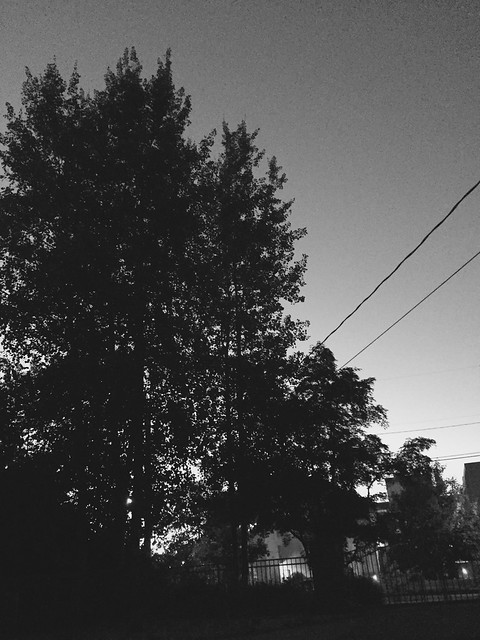 Whew, what a week. I love the birch trees in our yard – I took the photograph at about 9:00 PM on Friday night. Telfer was at work, the girls were asleep in their beds, and this was what I was doing: 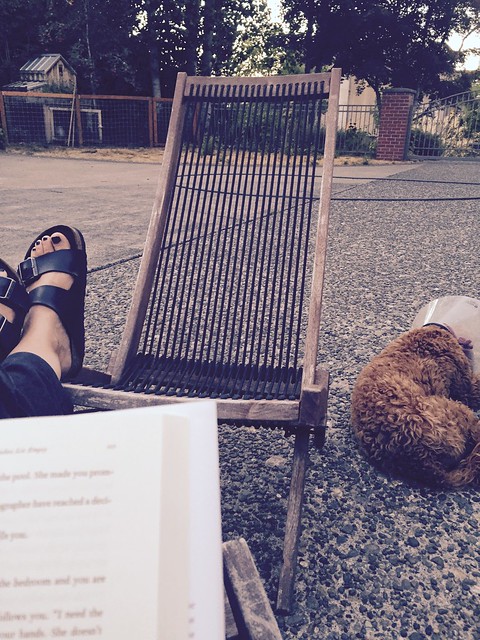 Exactly all I had energy for: reading outside with my little George. 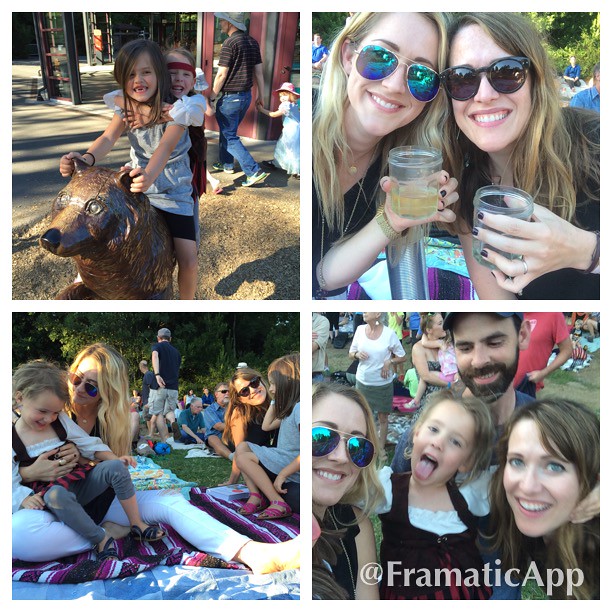 On Wednesday night though, we took part on what has become a summer tradition around Elizabeth’s birthday – Zoo Tunes at the Woodland Park Zoo. This year we saw Emmylou Harris and Rodney Crowell and it was awesome. Lucinda and Emmylou in one summer. Add Brandi and it would almost be too much. We pack a picnic, some drinks (thank you Telfer), the girls and meet Liz for the evening. This was the girls’ second year going with us and outdoor concerts with kids are really fun, especially once it’s not as hot (looking at you JANE. Also, yes, Jane is wearing a pirate costume in the photos. It was pirate week at her preschool and Wednesday was the day she could come in costume and clearly did not want to change for a concert). 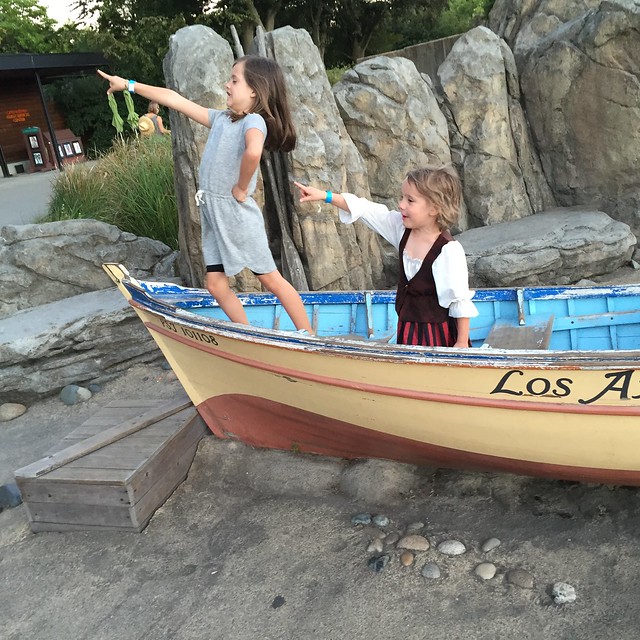 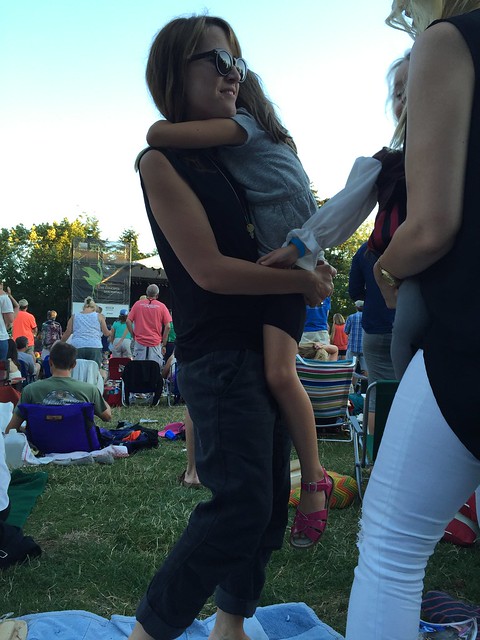 We drove home that night, put the girls to bed and I was unpacking the car and Telfer was watering our garden when George was hit by a car right at the foot of our driveway. It was 11:00 PM and the car was going much too fast on our quiet street and well, we are so very thankful that he had only a broken leg, a few staples and another little wound on his non-broken leg. I spent five hours (!) at the vet ER with him that night and he is such a sweet little guy. So now George is in a cast with the cone of shame for the next 4-6 weeks. Poor baby. He is still quite fast even hindered with a cast and gets to sleep with me and Telfer instead of his crate which makes him so very happy. 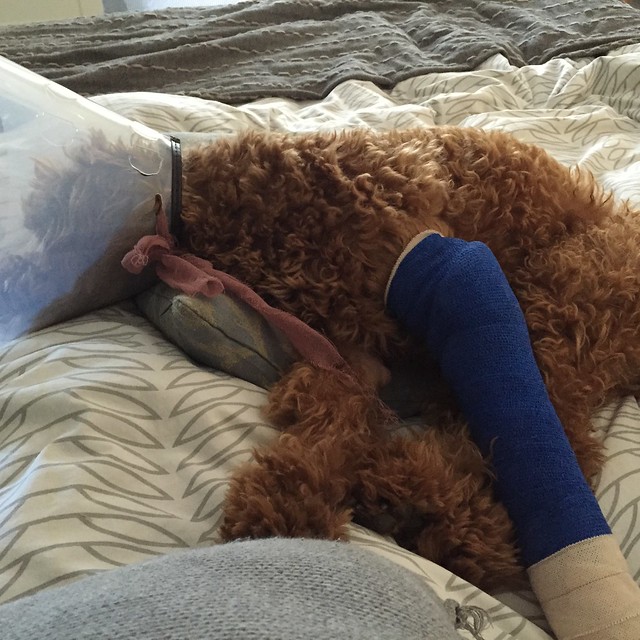 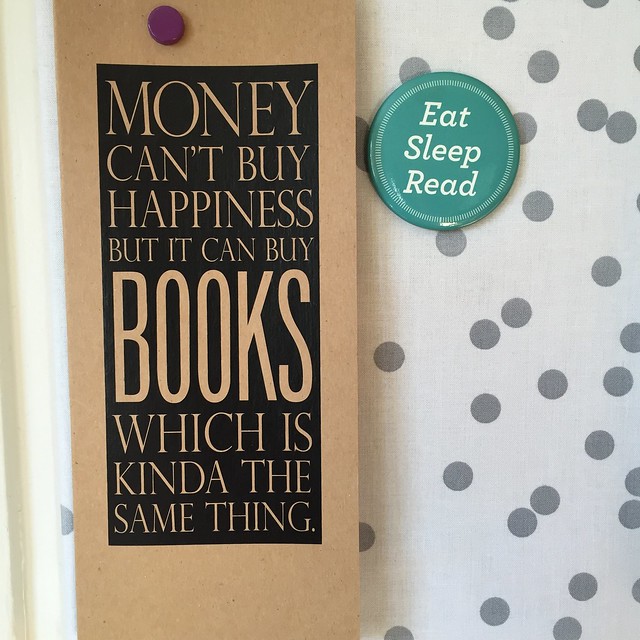 There were some really good moments this weekend. The parenting front has thankfully calmed down. Telfer took the girls out with friends on our boat (that’s another story) while I worked. On Sunday we went to Hood Canal and toodled about. Ice cream was involved. Telfer and I stayed up much too late last night chatting. It’s so good to be married to someone you really enjoy. And now it’s a new week somehow and I am in the thick of going live with the inventory system at the shop on Wednesday (cross your fingers – it’s been complicated) AND hosting our first book event (signing and reading) on Thursday.

*Oh, and p.s. all my book places are updated.